So, the Enos Kellogg Barn has been left stark naked - stripped of its collapsing roof, and disrobed of its rotting siding.


We've reached that phase of the restoration process where it becomes hard to see progress.  Which is not to say that significant progress is not being made.  It is just much harder to notice a tenon repair, the whittling of 150 wooden trunnels (pegs), or the cutting of floor joists than it is to see an entire wall or roof removed in a single day.
What has been a welcome site is the completion of the roof removal.  Our barn's roof has given me nightmares since the day we moved in.  Back in 2001, it already had a few holes in it, courtesy of a branch that impaled the barn on the previous owners' watch.  Several years back, we had an expensive tarp installed over the roof to keep the water out, and while it was effective, it looked like hell, and I cringed every time I saw it from the Merritt Parkway.  Being the old house obsessive that I am, I also hated seeing the miserable rafter replacement that had been inflicted on the barn in the 1980s - with badly-installed dimensional lumber marring the beauty of the timer frame.  Seeing a huge trunk of Superstorm Sandy-felled tree sitting astride the barn for the past six months also made me a little ill.  But, no more.  Good riddance to bad rubbish.  The new roof will be returned to the 12:12 pitch of the 18th century original (as evidenced by the last remaining piece of original roof plate), will include unmilled logs with one flattened face as rafters, and will be free of modern dimensional lumber.  Sadly, it will be too expensive to install cedars shingles on the roof, so we will have to go with a metal roof for the time being.  Hopefully we can re-roof once we win Powerball.  Otherwise, I give whoever owns the house in 100 years permission to curse my name for using a historically inappropriate roofing material.  Fair is fair.
Another exciting step forward is the arrival of the 30 foot log that will become our new tie beam for the east bent of the barn.  It appears that this particular piece of lumber has long been a problem for the barn - probably as a result of the northeast corner of the barn sinking over the years.  The original beam was no longer in place, having been replaced probably in the 19th century by a recycled 18th century hewn timber that appears to have served previously as a floor joist-carrying beam in another early structure.  This beam, too, failed at some point - cracking in half at its mid point.  To remedy that issue, another beam was sistered to the broken tie-beam - bolted along its top face.  With a newly-poured footer under the northeast corner of the barn hopefully eliminating the centuries old problem with the tie beam, we have removed the old replacements, and are going to install a new beam.
While I knew that the beam had to be hand hewn to honor the history of the barn, finding an appropriate 30 foot log proved to be a challenge.  Once again, though, my friend Clint Thorn came to the rescue, tracking down a huge, straight and relatively knot-free red oak log through one of his friends.  Delivered two weeks ago, Renard and his crew have hewn about 3/4s of the log so far.  The next step will be installing the new beam onto the east bent of the barn (which is currently lying on the ground) and then re-raising the entire bent.  That should be cool. 30 Foot Red Oak Tie Beam, Partially Hewn
Finally, I should point out the beautiful dry laid fieldstone foundation that is now partially in place around the barn.  The masons that Renard recommended are awesome.  We returned from vacation to find restored foundations on more than half of the barn - built just as they originally were 230 years ago, with stones from our property laid carefully with no mortar. 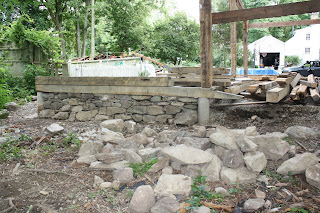 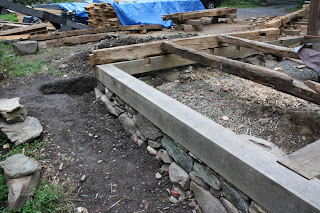 More photos to come as work progresses further.  Hopefully I will also have a "barn raising" video of the east bent going up in the next week or so.  Fingers crossed.
Posted by EnosKelloggHomestead

Sorry for posting this two weeks after the fact - delayed by vacation . . .

As illustrated by the four inch layer of white oak chips in our driveway, restoration work on the Enos Kellogg Barn continues to roll along.
The wood chips are result of the hand-hewing of a new corner post for the barn.  No sissy lumber mills for this post - only old school, bad-ass chopping axe and broad axe work.  For the three major timbers that need replacement, our barn restorers are starting with actual logs of white oak (bark and all) and creating the timbers using the same tools and techniques that were used when the barn was first constructed in the 1780s.

Work on the new corner post is complete, with the hewing finished, and all mortises and tenons cut.  One timber down, two more to go.
I have to say, it is truly fascinating to watch an experienced framer hew a timber.  Is it wrong that I sit in a comfy lawn chair and spectate while the framers are working their buts off with a broad axe?  At least I have the decency not to hold a cold beer while I'm sitting and watching.  That makes it ok, right? 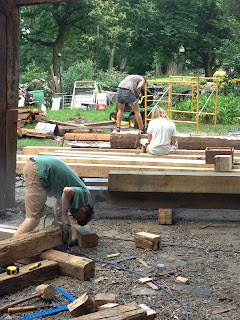 Renard and Company Providing Entertainment﻿
In addition to the corner post, the flooring system for the east bay of the barn is almost complete.  New footings have been poured, ground sills cut and installed, floor supports laid out, and most of the joists cut and installed.  Particularly satisfying was seeing the center post that had been swinging freely in the barn since we purchased the property in 2001 (and probably for many more decades before that) finally mortised into a solid piece of white oak. 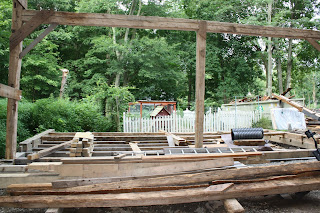 New Sills and Floor Joists﻿
I even tried my hand at metal detecting to see if  could find any artifacts before the floor goes in.  This experiment was hugely successful if you are a fan of 20th century nails, of which I found close to a hundred.  In terms of interesting finds, though, it was a complete bust.  I'm hopeful that I will have more luck in the west bay once the concrete pad in that area is removed.  That was the animal bay, and likely had no floor in the 18th century.  I'm hoping that someone had the decency to leave a coin or two in the dirt a couple of hundred years ago.
At this point, work on the east bay is as finished as it can be until we get the 30 foot white oak log that will be hewn into the horizontal tie beam that runs from corer to corner at the gable end of the barn.  That will be a monstrous amount of axe work.
Hopefully, we will get a load of wood delivered in the next couple of days, and the barn can creep a little closer to restoration.

Here are a few other sights around the barn:


A post jacked up awaiting installation of a new sill below.﻿ 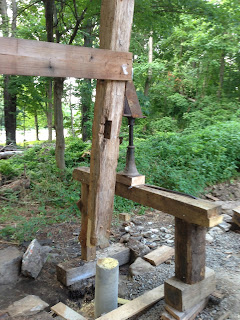 An 18th century construction error.  Look closely at what looks like a thumbprint to the right of the nail.  This is the beginning of a spoon auger hole, apparently started a couple of inches too far to the left of where the diagonal brace was supposed to intersect the post.
﻿ 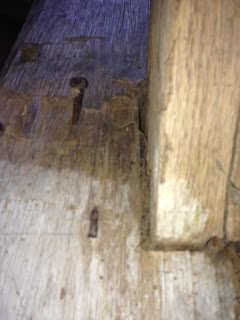 The Other Enos Kellogg Houses

Just a quick posting on two other Enos Kellogg Houses that still exist, both in New Canaan, CT.
This "second" Enos Kellogg House, at 296 Carter Street in New Canaan, is located just under two miles from us.  As Ponus Avenue and Carter Street were essentially one continuous roadway prior to the construction of the Merritt Parkway,  this property was literally up the street from our house.

The Carter Street property was previously owned by Enos Kellogg's father-in-law, and then passed on to Enos' brother-in-law, Abijah Fitch.  "Master Bije", as he was known, was a schoolmaster, teaching at one of New Canaan's one-room schoolhouses.

In 1819, Enos held a note on the property from Abijah, and it appears that Abijah defaulted on the note.  He did, however, continue to live in the house, probably until his death.  By 1830, Enos' daughter, Hannah, also lived in the house, along with her husband, Minot Ayres.  Master Bije, who never married, continued to reside in the house along with the Ayres family.

Upon Enos' death in 1832, the property transferred to Hannah.  Enos also left Hannah $1200 to buy out an interest in the property held by her cousin, Matthew Kellogg.

Here is a video tour of the house from when it was for sale a few years ago.  Beautiful.

Amazingly, a "third" Enos Kellogg House is also still standing in New Canaan.  This property is at 166 White Oak Shade.  Also known as White Feather Farm, the then 17 acre property came into Enos' possession when Ezra Seymour Jr. defaulted on a mortgage note held by Enos in 1813.  It appears that Enos held a mortgage on an additional four acres, but Ezra's father bailed him out by paying off the debt on the four acres.
It seems that Enos built the house on the property at some point between 1813 and 1830 (and more likely than not after 1820), probably as a residence for his orphaned nephew, Matthew Kellogg, whom he raised in our original recipe Enos Kellogg House.  Matthew's father was Enos' brother, Isaac Kellogg, a soldier in the Revolutionary war who served in Lt. Carter's Company in 1776.

So, there you have the two "other" Enos Kellogg Houses.  While Enos never lived in either one, he owned both at the time of his death, and likely built one of them.