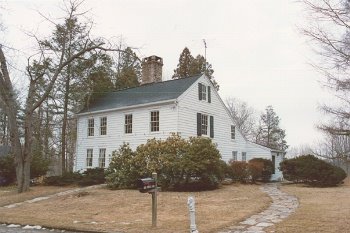 Here is an exterior shot of our house when we bought it in September 2001. Actually, I believe that this is the picture I first saw on the web that piqued my interest to begin with and kicked off this whole deal.

The real estate agent clearly was doing her job, selecting a vantage point and angle that drew attention to the classic saltbox profile and the "park like setting" (as I recall the realtor-speak blurb claiming), yet far enough removed to mask the well-worn roof, poorly installed replacement windows and overgrown back yard (an impressive mixture of steroidal forsythia seasoned with an unhealthy dose of poison ivy).

That being said, we now owned, in concert with our fine friends at Astoria Federal Mortgage, an undeniably cool house with lots of potential.
Posted by EnosKelloggHomestead

Hi everyone. Maybe "Hi anyone?" is more like it. Almost five years into our restoration of our c.1784 home in Norwalk, Connecticut, I'm finally going to put some of this on virtual paper.

Since we're starting out half a decade (scary) into the project, I'll give a little background, starting with the:

Me - John. 33 years old, born in Maryland, working in New York City, living in Connecticut. Obsessed with our house.

Jenny, my wife of almost 4 years. 31 years old, grew up a few miles south of us in CT, working a few miles north of us in CT. Less (o.k., not) obsessed with our home, but a generally good sport, even when I find it imperative put a "small" 5'x5' hole in our living room ceiling, just to see if some beautiful beams might be hiding above the decrepit drywall. Shortly before Christmas. God bless her.

Our cohabitants - Callie and Junior, our cats (baseball fans and those from Bawlmer should appreciated the juxtaposed cats names). Also, Elvis and Blackberry, the cats, both former residents, dearly departed.

The Good: Jud, Esteban, Cesar, Russ, et al. The talent behind the evolution (revolution?) of our house.

The Bad: Crazy Chimney Guy, Half-Assed Window Guys. Hopefully not too many more to come.

The Ugly: Various and sundry who touted a "tear it down, put up some condos and make a ton of money" plan for our property.

Basic background
2001. Both Jenny and I living in New York City. Astronomical rents being paid on two small but charming apartments. Jenny having quit her first job and about to head off on a summer-long cross country adventure with her friend Courtney. Just out of curiosity looking at what it would cost to move into one larger, hopefully more charming place to live, funded by two salaries.

Jenny's half-serious investigations into homes in Connecticut turn up a nice, but termite infested rental cottage (outrageously expensive), and several tiny, even more outrageously expensive homes for sale in toney, but terminally snooty, Darien, CT. And then, a sighting of a really cool looking, prototypically New England saltbox house on a real estate website.

Happily, despite being in the middle of a fight about some unknown, and probably stupid thing (certainly not my fault), Jenny agrees to go look at this unique fixer-upper opportunity. Greeted by a wild turkey in the front yard, but no one else at home, we snoop around, peaking in the windows and checking out the 1.7 acre yard. I'm hooked. Our real estate agent shows us the inside the next day. The house is amazing - spacious, with beautiful wood paneling, a huge stone hearth in the living room (original kitchen), and narrow, well-worn stairs winding up two bedrooms on the second floor. Even better, it's in great shape, at least in the eyes of two twenty-somethings who know absolutely nothing about old houses, antiquated plumbing, alligatored paint, wiring worthy of a display at a Thomas Edison museum, rotting sills, leaky roofs and a full acre of poison ivy. So, to the puzzlement of everyone, we decide to buy the place. Offer made. Counter offer received. Negotiate . . . negotiate . . . negiotiate. Offer accepted. Yeah!

Then we wait for four long months for our closing on September 21. With much of our down payment tied up in Jenny's brokerage account, we decide that, just to be safe, she will sell the stock ten days in advance - on September 11, 2001. That morning, with Jenny waiting at my apartment for the market to open so she can place her sales, I get off the elevator on the 56th floor of my office building in Midtown Manhattan, seconds after terrorists have flown a hijacked plane directly overhead, and followed a path southward to crash it into the World Trade Center. A second plane hits minutes later and we evacuate. Like my office, and virtually everything else in New York, the stock market is closed for days following the attack, and our downpayment sits out of our reach. When the market reopens, we raise the needed cash and wrestle with our bank until literally an hour before our scheduled closing to make the money available to buy our home.

Finally, the closing is over, and the house is ours. En route to a celebratory lunch with our real estate agent, an elderly woman coming off of a side street runs a stop sign and narrowly misses our car. Inexplicably, despite the fact that she has just come inches from smashing into us, she is consumed by a fit or road rage. Honking, accelerating to our bumper and swerving back and forth, she appears hellbent on finishing the job of running us down. With her racing towards us, Jenny begins evasive maneuvers. I should probably mention at this point that the brakes on our car are failing. As in not working, with a crazed geriatric nipping at our fender. I should also mention the old goat's license plate, which I can discern in my frantic glances backward reads "GGOAT". Yup. Very self-aware of the old broad.

So, Jenny is driving like Bo Duke with Sheriff Roscoe in hot pursuit. The brakes are smoking and we're doing 60 miles an hour on the otherwise quiet suburban street crossing the border between Greenwich and Stamford, CT. We whip into a small development abutting Long Island Sound, and find ourselves driving towards a dead-end. Jenny turns the car around, and there she is - GGOAT parked in the middle of the road, standing next to the open driver's side door and literally shaking her raised fist at us. Jenny swings up onto someone's lawn (sorry), and around the car blockade. We shoot up the road a mile to her Mom's home and barricade ourselves inside, two able-bodied young adults cowering from an octogenarian.

After a suitable waiting period, we check both directions to make sure an angry AARP mob isn't headed our way with torches and pitchforks, we head up the road to check out our new old house. We only have time for a quick tour of the home (where we notice that the house seemed to be in a bit more disrepair than it looked when it was full of furniture), and head off up I-95 for our friends Missy and Alan's wedding in Dorsett, VT.

There we are, we own the house. Now we just have to fix it up a bit. No big deal, I'm sure.
http://www.houseblogs.net
Posted by EnosKelloggHomestead