The 228th Christmas in the Enos Kellogg House

As much as I like to stay true to the 18th century period of the house, I make a big exception when it comes to Christmas time.  Christmas in New England in the 1780s just wasn't sufficiently festive for my tastes, and I can't imagine forgoing a glowing tree for the joys of a full day in church and maybe a piece of candy or fruit.  To be fair, Enos Kellogg and his contemporaries didn't have the benefits of electricity, injection moulded plastic and recorded music, each of which lend their unique charms to our modern Christmas.  Hell, they didn't even have Santa to spearhead the whole initiative.  Sure, there was St. Nicholas, but the original St. Nick lacked the panache of Santa (by the way, let's take a minute to thank Thomas Nast, Clement Clarke Moore and Coca Cola for the gift of the man in red, as we know him today).  Nonetheless, sometimes modern life is just unquestionably superior to those happy golden days of yore, and Christmas, like indoor bathrooms, falls squarely into that category.
That said, contemporary, 21st century style Christmas is not my thing either.  As far as I'm concerned, the Christmas aesthetic peaked in the 1930s and 40s.  Granted, this is no doubt informed by too many viewings of A Christmas Story and Miracle on 34th Street (the original 1947 version starring the definitive silver screen Santa, Edmund Gwenn, not the abomination of a remake from 1994).  Still, all-white Christmas tree lights, jewel-colored LEDs, designer-trees bedecked in gold ribbons, and Justin Bieber Christmas songs leave me cold.  I need hot-burning C6 lights from the '40s (preferably bubble lights), mismatched ornaments, tinsel, and the classic Bing Crosby holiday catalog.
So, this year's main Harrington Christmas tree is lit by approximately 100 vintage lights (on dimmers so as not to set the place afire), including 25 bubble lights from the late 1940s.  Ornaments include a hodgepodge of decorations that range from some early glass ornaments the my parents gave us, to some 50s and 60s favorites that hung on my grandparents tree when I was young, to a small group that Jenny gave me for our first Christmas together in 1994, to  a paper plate wreath that our daughter Brooksie made this year.  There is no theme, certainly no sophistication, and the only thing that unifies the tree is the tinsel that covers everything.  Still, it all works together, as far as I am concerned.

As you can see, the rest of the house gets the full vintage Christmas in Connecticut treatment, as well.  Greens from our yard, antique Santas, snowmen, sleigh bells and, of course, the Christmas Garden all get their due.  Did I mention the second tree in our den? Suffice it to say, we have a lot of ornaments.  Don't ask how many plastic tubs all of this stuff fills up in the off-season.

While it may not feel like it when we're in our dirty second floor crawlspace pulling out container after container of decorations, it's a labor of love, and the resulting excitement of our kids, which manifests itself in almost a full month of frenzied singing, dancing and sundry Christmas spirit makes it well worth the work.

So, while I take a pass on authentic colonial Christmas, I can't imagine spending Christmas anywhere other than in our old house.   For making it possible, and with apologies to Charles Dickens, raise a glass of Christmas cheer, and I'll give you Mr. Kellogg, the Founder of the Feast! 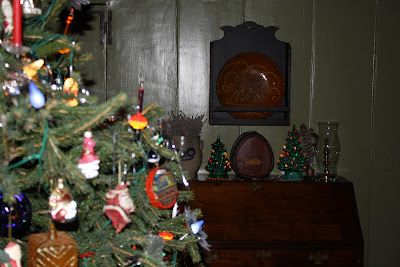 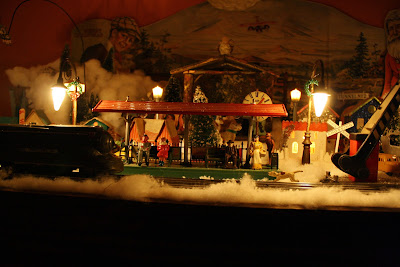 7 comments:
Email ThisBlogThis!Share to TwitterShare to FacebookShare to Pinterest

It being December and all, I am going to briefly switch tracks from my normal old house ramblings to pay homage to my favorite of all Christmas traditions - the Christmas Garden.
For those of you who are conjuring up visions of poinsettias, holly bushes or some sort of festive horticultural extravaganza, please accept my most sincere sympathies for the deprivation that you have so clearly endured in your life.  On the other hand, for those enlightened souls who immediately picture the sparkle of mica on a well-worn cardboard house, smell a fleeting whiff of ozone from an ancient Lionel transformer, or hear the unmistakable Baltimore accent of a long-forgotten neighbor, I hope that you will grab a glass of egg nog and sit down to watch the trains while I school our less fortunate friends. 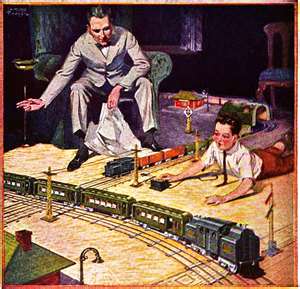 According to the Encyclopaedia Kriskringlia, a Christmas Garden is defined as a miniature village set up at Christmas time, located either beneath the Christmas tree or on a raised wooden platform, and encircled by an electric train.  Actually, I made up the reference book (how can Wikipedia not have a Christmas Garden entry?), but the definition holds true despite its questionable source.


At its most mundane level, a Christmas Garden can be nothing more than a few Department 56 buildings and a new-from-WalMart train set (this qualifies as a Christmas Garden only technically, and certainly not in spirit).  At the other extreme, it can be a display large enough to fill an entire fire station, and requiring hundreds of man hours to erect (check out the Wise Avenue Fire Department in Dundalk, MD, one of the few remaining public meccas of Christmas Gardendom). Whether large or small, however, when artfully executed, a Christmas Garden can be transcendent - a melting pot of ingenuity, nostalgia, childish wonder and manifest Christmas spirit.

Boring Historical Perspective
(If you are in a hurry, feel free to skip this section, like that interminable discourse on whaling in Moby Dick that nobody ever reads,  whoops, too late, you've already come this far so might as well keep reading . . . )

These displays surfaced in America in the 19th century, brought to the Mid Atlantic region by German immigrants.  The once static village scenes took on new life in the Victorian era with the arrival of electric toy trains.  As Marx, Lionel and American Flyer made these trains more accessible in the early 20th century, the stage was set for the golden age of the Christmas Garden.  Sometimes referred to as Christmas villages, train gardens, or Putzes (shout out to my large readership of Pennsylvanian Moravians), they flourished in Maryland as Christmas Gardens, and remained stalwarts of the Christmas season around Baltimore through 1960s.

The Baltimore Christmas Garden
Born in 1972, I missed the heyday of the Christmas Garden.  Once upon a time, as the legend goes, every fire department in the area featured its own elaborate Christmas Garden (a few still do), as did many private homes.  My grandmother used to tell us about her father's Depression-era garden, which featured moving playground equipment and other motorized scenes.  Sadly, no pieces of that garden made their way down my branch of the family tree.  Still, my grandparents always had a train around their tree, and I remember a second garden with old Lionel trains in their basement at Christmastime when I was very young, as well as a more elaborate, multi-level garden in the house across the street.  For a 6 year old boy, there probably is nothing cooler than getting hopped up on Christmas candy and watching trains fly around a track next to a Christmas tree the week before Christmas.

From the time I lived in my first apartment in New York City, I have always had a train around the tree, and was a little surprised that this wasn't part of Christmas everywhere.  Like sauerkraut at Thanksgiving dinner (weird, but true), it is one of the things that is so imbued in you growing up in Maryland, that you just assume that it is universal.

A few years ago, with a house of my own, I decided that it was time to set up a proper Christmas Garden.  So, with a few pieces from my parents and grandparents, and with lots of help from eBay, I got to work.  Having built my own garden,  I obviously am now an authority, and have a boundless font of wisdom from which to fill your eager minds.  So, get out your pencil and take notes.

Hey, Kids - You Can Build your own Christmas Garden Right at Home!
While much of the beauty of the Christmas Garden comes from the individuality that is reflected in each display, there are a few key ingredients that I think are necessary for a classic Baltimore Christmas Garden.  These are: 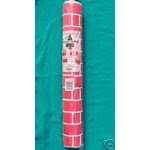 So, there you have it.  The Christmas Garden in all of its holiday splendor.  Now, go get out your grandfather's Lionel trains and set them up around the tree.  I'll be working alongside you in spirit.  Having missed my self-imposed schedule of setting up the Christmas Garden the Saturday after Thanksgiving (much to my 2 year old's disappointment), my project for the week is to get everything up and running by the weekend. 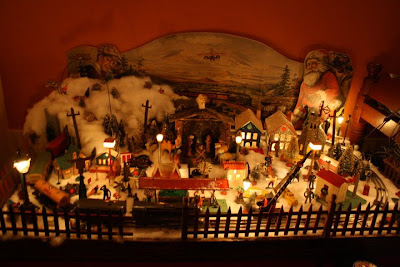 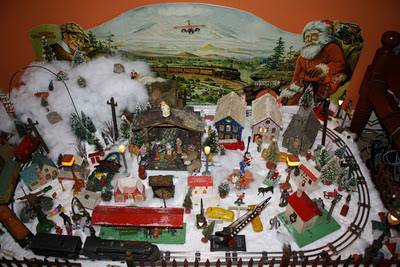