Barn Restoration! Coming Soon to a Theater Near Me

When I first set up this blog and came to the part where I had to give it a name, my initial inclination was to call it the Enos Kellogg House.  In fact, that's even the url of the web site.  It seemed like the obvious name, and that is what is says on the Norwalk Historical Society plaque that is attached to the front of the house.  As you might have noticed, however, I ultimately went with the word homestead instead of house.
Part of the reason for this specific semantic choice is that homestead is the world that Enos Kellogg himself used to describe our property in his will.  More so, however, is the fact that where we live is, and always has been, physically speaking, more than a house.  From its inception in the 1780s, the property has been a homestead in the truest sense of the word - a house, related buildings and the land on which they sit, all operating together to sustain themselves.  As with any farm, there was a symbiotic relationship between the three elements - to work the land, you needed a proximate house in which to live, and a set of agricultural buildings to allow you to conduct the business of living an agrarian existence.  Take away any one of the three elements, and the whole way of life falls apart. 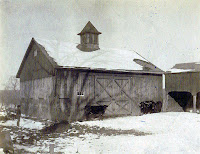 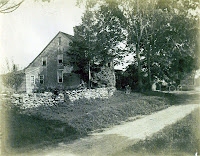 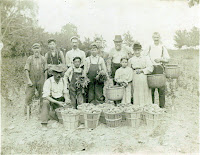 With most 18th century homes, particularly those that are now located in suburban areas, lifestyle changes, neglect, time, and progress in general have slowly peeled away the attendant features of a homestead until there is little left beyond the shell of an old farmhouse surrounded by modern tract houses.  Even success can trigger the demise of an early American farm, as wealth allowed owners to modernize their homes (removing outdated original architectural features in the process), or even to completely replace what at one time probably felt like embarrassingly outdated structures with more modern dwellings.  In many cases, accumulated wealth eventually freed whole generations from the need to farm at all, severing the once-crucial relationship between land, house and agricultural structures.  With barns, outbuildings and surrounding acreage no longer needed to support a family, they became expendable, and began to disappear.
In this regard, we are extremely lucky.  Although our property, which once occupied more than 60 acres, has been whittled down to just under two acres, the property's heritage remains unmistakably agricultural.  The original farmhouse, two timber frame English barns and a stone carriage barn remain standing in their original locations.  Stone walls continue to delineate what were once fields and pastures.  Granted, one timber frame barn and the carriage barn have since been converted to residences, there are some obviously 20th century houses sitting in the middle of the old fields, and smaller outbuildings like chicken coops, privies, and a cider mill are long-gone (not to mention the Merritt Parkway running through the northernmost acres of the original property), but the epicenter of the old homestead - the house, the major outbuildings and the core property on which they sit - remains intact.  As the current stewards of the homestead, it is our responsibility to keep it that way.


So, with that long-winded exposition out of the way, we are moving (not entirely on our own terms) on to our latest effort to preserve the homestead - stabilization and eventual restoration of the English, three-bay threshing barn that is located to the north of our house.  After super-storm Sandy delivered a huge pine tree from the Merritt Parkway right-of-way through the roof and northeast corner of the barn, our decade-old plan of nursing the barn along until a time-to-be-determined (i.e. when we win the lottery) went out the window.  With a broken corner post and the entire back roof trashed (almost every rafter broke, and the plywood decking is now unusually well-ventilated), we really can't afford to put it off any longer.
The barn is likely the original agricultural structure associated with the Enos Kellogg Homestead.  Review by an architectural historian dates the structure to circa 1790, which puts it squarely in the era of our home's construction.  However, as was recently pointed out to me by Todd Mendes, a timber framer who has been planning out the barn's restoration, it was actually common to erect the barn on a farm before building the more complex dwelling house, as the house construction would necessitate the storage of materials, and a place to keep the animals needed used in the construction process.  So, our barn could actually pre-date the house by a short amount of time.

While we like to think of our barn as something special, it is actually pretty typical of what you would have found in Connecticut in the late 18th century.  Based on their typical dimensions, these barns are also colloquially known as 30 by 40s, which is the exact size of our structure.  Our barn is divided into the standard three main sections, or bays.  One end bay would have stored the inputs and outputs of the farm (hay and grain, respectively), and a bay on the opposite end would have held stalls for animals.  The middle bay served as a threshing area.  As a through-barn, wagons could have been drive in through the huge doors on one of the barn's long sides, loaded or unloaded, and then driven out the other side.

The construction of the barn is actually pretty simplistic.  The main frame consists of four sections, or bents.  Each bent is comprised of vertical north, south and middle posts, connected together at the top by horizontal girts, at the middle by horizontal nailers, and at the base by ground sills.  The major intersections in the frame are connected using wedged, half dovetailed through mortise and tenon, pinned with a large wood peg (also called a trunnel).  Diagonal knee braces reinforce each corner.  Each of the four bents is connected together by horizontal beams, again at the top, middle and bottom.  The roof, which consists of 24 rafters, stabilized by horizontal collar ties and purlins, sits on rafter plates around the perimeter of the structure.
The barn's original timbers are all chestnut, although there have been quite a few replacements of individual timbers over the years, almost all very poorly executed.  All of this bad work will need to be addressed in one way or another as we move forward with restoration of the barn.  As has been the case with our house, our plan for the barn is to save as much of the original material as possible, although we will certainly need to replace quite a bit of wood.  Where a post is rotted at the bottom, we (and by "we", I mean the professional timber framers) will cut out the bad wood and marry in solid wood.   For the major posts and beams that need total replacement (like our shattered corner post) my hope is that we will be able to use reclaimed, hewn chestnut timbers (outrageously expensive, what with chestnut being pretty much extinct), although we will probably use newly-milled white oak in other areas.
We will also need to do some repair work on the foundation as part of our restoration.  Amazingly, the foundation consists of nothing more than huge stones set directly on the ground at grade level.  While there has been surprisingly little settling in the structure over the past 230 years, we will likely add concrete footings under the north corner posts, and will have to rebuild the stonework along the north and east sides of the barn where stones have shifted around.  Fun, fun, fun.
Funding for stage one of the barn restoration will come, in part, from our insurance company, which will cover the work on the tree-smashed post and roof, and partly (somehow) from us personally.  I have also applied for a stabilization Barn Grant from the Connecticut Trust for Historic Preservation, which runs an amazing program to document and protect barns throughout our state.  Keep your fingers crossed for us on that one.  They also have a great website, by the way, Historic Barns of Connecticut, for anyone who is interested in . . . historic barns of Connecticut.
OK, that's enough barn talk for now.  More to come once we actually get things underway.  For you masochists out there, though, here is some more information on our barn, excerpted from my grant application.
Enos Kellogg Barn
This timber framed structure is located just to the north of the c.1784 Enos Kellogg House, and is listed as a contributing resource on the 2012 National Register of Historic Places nomination for the Enos Kellogg dwelling house.  In the opinion of architectural historian James Sexton, the structure evidences a late 18th or early 19th century construction date, with a likely approximate date of construction circa 1790, in the time period concurrent with or following construction of the associated c. 1784 dwelling house.
The property and barn descended from Enos Kellogg via his daughter, Esther, into the Comstock family, with direct descendants continuing to own the property until 1917, operating the property first as a family farm, and subsequently as a nursery and orchard.  As a commercial enterprise, the business, know initially as Comstock Brothers, and subsequently as Comstock & Lyon, was listed in Norwalk city directories and advertised in local newspapers as fruit growers, flower merchants (specializing in Dahlias), and producers of apple cider.  The farm was later owned by John J. Cavanagh, founder of the Hat Company of America (once the world’s largest hat manufacturer), and Mayor of South Norwalk, who operated it as a private estate.  It remained in use as a weekend “gentleman’s farm” for a wealthy New York optometrist until 1947.
The barn was constructed as a traditional, English three-bay “through” barn, in the classic “30 by 40” style.  The major framing members are chestnut, although subsequent alterations saw the removal of certain original framing members, some of which were replaced with other species of timber, or with modern dimensional lumber.  The barn also shows evidence of later framing work, executed using square rule framing techniques.
Victorian era photographs of the property show the structure in active use as an agricultural structure.  The barn has undergone various changes over the years, including the addition and removal of a cupola, and the probable replacement of the vertical siding on at least three of the four sides.  Three cattle stanchions remain in place, anchored into a concrete gutter inscribed 1917.
The barn and surrounding structures (dwelling house, later period timber frame barn and stone carriage house) are all known to have been standing in their current locations at least as early as 1832, as evidenced by the will of Enos Kellogg, who died in that year.  As such, the grouping of structures provides important context and insight into rural farming operations in the late 18th and early 19th centuries in southwestern Connecticut.  Prominently visible from the Merritt Parkway at exit 38, and from New Canaan Avenue, the barn is an important reminder of the agricultural legacy of the area, most vestiges of which were lost following the construction of the Parkway, and the area’s emergence as a suburban commuter community in the 20th century.
Posted by EnosKelloggHomestead