The Whale House, The Old House and Other Stories 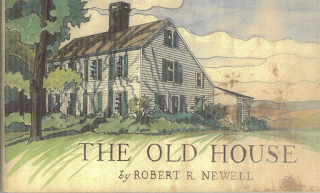 One of the many small mysteries that we encountered when we moved into our house ten years ago was a peeling wooden sign located across the street from our house.  The sign hangs (still) in front of the stone carriage barn (now an apartment) that was part of our home's property until the 1970s.  Both sides of the sign feature the image of a whale, with "Whale House" inscribed below. 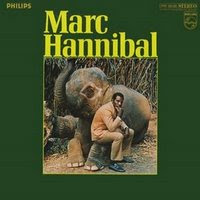 Curious about the sign, Jenny and I asked the then-owner of the house across the street for the history.

I have to break for an aside here to tell you about our straight-out-of-a-sitcom neighbor. Marc Hannibal was a former Harlem Globetrotter, a 1960s and '70s television and movie actor who guested on shows like Dragnet and Mission Impossible and appeared in the movie Airport, and a singer who released two records, including one with what may be the greatest album cover of all time (pictured at right).  Our first introduction to Marc was seeing him, clad in his bathrobe, walking his dog in our backyard the morning after we moved into our house.  After introducing ourselves to each other, Marc declared that his dog-walking privileges were "grandfathered" with our house, and continued on with his walk around our back yard.

OK, back to the Whale House.  Our neighbor Marc told us that the complex of stone carriage house and timber framed barn across the street from us looked like the shape of a whale from above.  I couldn't see the similarity, but that was the story, and we didn't think too much more about it.

Last year, however, when I was doing more research on the house for our National Register of Historic Places nomination, I spent some time looking at the Robert R. Newell family who  lived in our house from the 1940s through early 1970s.  As part of this research, I learned that Robert R. Newell was a very successful New York advertising executive.  After his retirement, he went on to a successful career as an artist, whose specialty was watercolor paintings of whaling ships.  Aha!

Through the wonders of Google, I found not only several of Mr. Newell's paintings selling at auction in recent years, but also the following biography at at the New Bedford Whaling Museum, whose research library holds Robert Newell's are research papers:

"Robert R. Newell (b. 1906) was an advertising executive and continued to serve as chairman of the board of the firm Cunningham & Walsh of New York after his retirement in 1961.  He became interested in whaling in the 1940s and began to collect artifacts and to research this subject.  Newell established a museum in his home in Norwalk, Connecticut to display his collection of paintings, prints, rare books, scrimshaw, etc.  He also established his own art work and to publish works of maritime interest.  After his retirement, he began to paint vessels and whaling scenes in the style of the noted marine artist Benjamin Russell.  Newell had several of Russell's paintings in his collection which he studied to perfect his own painting technique.  Also prior to painting a vessel, Newell would research the vessel to insure accuracy in his depiction of it and a noted feature in his works were the correct owner's private signal flags and ship's name pennants flying from the masthead.  His paintings are represented in several collections both public and private."

So, there it was.  The Whale House was a whaling museum and gallery, located in our home's old carriage barn.  Who'd have thunk it?  The use of the structure as a gallery shed some light onto a late 1960s renovation of the stone carriage house, which saw the installation of an anachronistic glass rear wall - clearly a project undertaken to turn a dark structure into suitably bright gallery space.

A 1975 article in the Norwalk Hour concerning a local art exhibition at the Lockwood Matthews Mansion further describes the Whale House Gallery as containing "scrimshaw, ship models, harpoons, and other memorabilia pertaining to the whaling industry at its height in New England."

A little more digging online turned up this advertisement from the October 8, 1969 Wilton Bulletin, inviting the public to a "Special Fall Showing" at the Whale House Gallery and Whaling Museum, with a map leading to our home.  Pretty cool.

As part of his whaling interests, Mr. Newell also ran a publishing business called "Whale House Press" from our house.  The business published a series of nautical monographs, including Steam Whaler Navark: Lost in the Arctic Ice, 1897, and Two Brothers: Narrative of a Voyage around the World in the Bark "Sea Breeze", 1850, which appears to have been based on journals of Captain George Newell, one of Mr. Newell's ancestors (probably explaining his nautical interests). 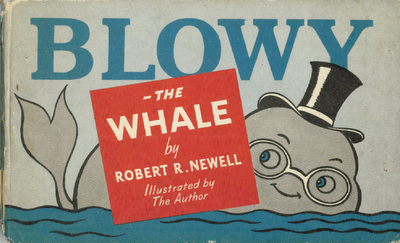 One last interesting find on whaling and Mr. Newell.  In 1945, shortly before moving into our house, Robert Newell released his first children's book, called Blowy the Whale.  The book is described in a 1945 Christmas advertisement in the Spokane Daily Chronicle as a "Deep-sea adventure for the little ones, in which Blowy, a grandfather whale, and his mischievous grandson outwit some whalers.  Illustrations in color by the author.  Ages 3-6."  Retail price: $1.  I paid slightly more for my copy purchased online.

The only other Robert Newell children's book that I have found is, I think, unpublished.  One of the things that we inherited with the house was a color copy of an illustrated story - "The Old House", with seasonal illustrations of our house and a short narrative.  Sadly, the previous owners kept the original book, and gave us just a copy.  Nonetheless, I am pleased to present the first online publication of that story below. 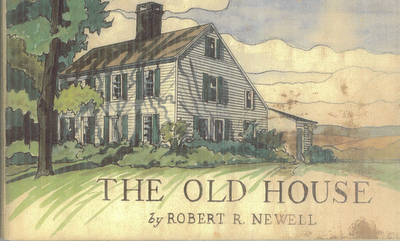 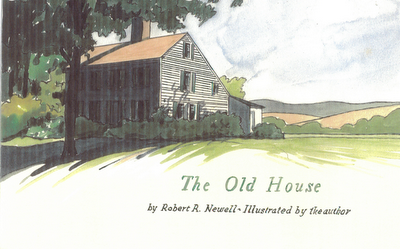 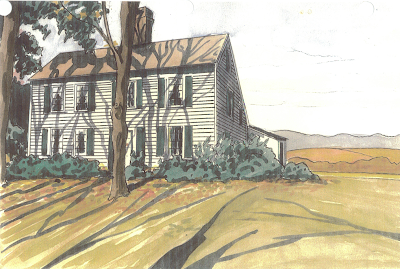 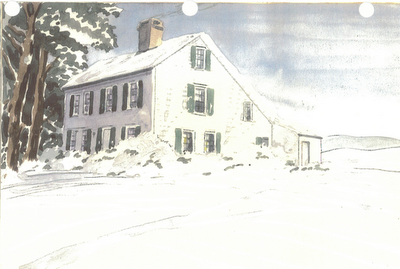 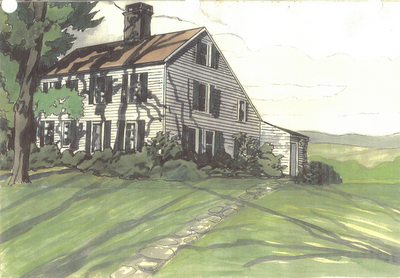 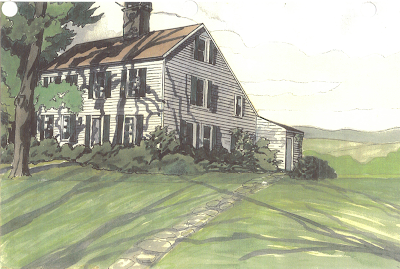 8 comments:
Email ThisBlogThis!Share to TwitterShare to FacebookShare to Pinterest

Who am I to begrudge a house of a certain age a little nip and tuck?  After a couple of centuries of hard living, there are bound to be a few more cracks and a little more sag than in the bloom of youth, and there comes a time when it just makes sense to let the professionals fix the things that can no longer be covered up.
With that in mind, we recently decided to reshingle the front of the Enos Kellogg House.   Beyond the worn paint, cracked shingles and fine layer of mildew, we were long overdue to remedy a butchered window installation job that had left the front of the house with double sills and mis-sized casings on each window.  As fixing these issues would require stripping the facade of the vast majority of its shingles, we decided to go all in and tackle the entire thing.  This would also give us the opportunity to insulate and wrap the wall, which should make future winters a lot more comfortable.

To save money, I stripped off the bottom two thirds of the shingles myself (I hate heights and wasn't up for prying off shingles from the top of an extension ladder), and volunteered as daily clean-up crew for our contractor.  Our carpenter, Cesar, then set up a pump jack and removed the remaining shingles.

As the shingles (first half of 20th century replacements) and old sheathing (likely 19th century replacements) came down, we made a few notable discoveries.  First, there were a variety of mouse nests (including a huge one in the wall of our bedroom, where I have heard critters scurrying about each winter for the past 10 years), hundreds of acorns deposited by the furry visitors over the past century, and a few dozen desicated corncobs, remnants of our home's original insulation.

Generating a little more excitement, tucked on top of the beam that holds up the second floor, Cesar pulled out a long clay pipe stem, a black wool stocking (I am guessing 19th century, but really have no idea) and a small, grungy bottle.  After a thorough cleaning, the bottle turned out to be a beautiful green blown vial with a pontiled base and applied lip.  By coincidence, the same day that I cleaned out our bottle, I saw a nearly identical bottle listed on ebay, described as a Revolutionary War era medicine bottle.  While I'll never know for sure, it is possible that both the bottle and pipe stem had been sitting on that beam since the wall was originally closed up in 1784.

The other good find in the wall was a 1940s-50s green, conical Christmas light bulb that must have gone through one of the old mouse holes in the baseboards of the house.  While the bulb itself is nothing special, I'll take it as a wink in my direction from the house, given my affinity for Christmas decorations from that period.

The last discovery behind the shingles was a little less welcome than the pipe stem, stocking, bottle and Christmas light.  As seems to happen every time we open up a wall in our house, we found a six foot rotten section in the beam between the first and second floors.  After my contractor dropped the terrifying "structural engineer" phrase, we decided to engage in a practical test before proceeding further.  I went inside to a second floor bedroom and jumped up and down on the floor directly over the worst of the rot as our contractor and carpenter watched from the outside.  No movement!  Another perfect illustration of the beauty of 18th century timber framing - strong old wood and over-engineering can compensate for a wide range of sins.  Thankfully, Cesar was able to cut out the rot and sister in new lumber in only a few hours.
With the framing fixed, in went the insulation, up went the plywood sheathing, house wrap, and window casings, and then the shingling began.  With the shingle courses on the adjacent sides of the house typically not lining up on the same horizontal plane, it took some careful planning by Cesar to lay out the courses, but the end result was excellent.  I doubt that the house has looked this good since the 1780s.  Once again, the benefits of using experienced craftsmen who know and love old houses proved to be the key to a job well done.  If anyone in my neck of the woods needs an amazing old home contractor, I can't recommend RJ Aley enough.  Jud and his team have worked on our house since we moved in more than ten years ago, and I shudder to think how our restoration would have gone without them.﻿﻿﻿﻿ 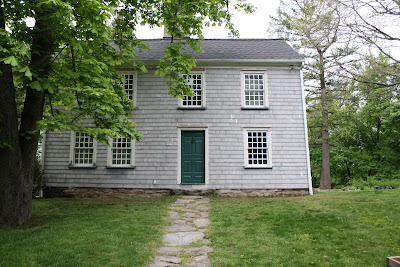 With the shingling now complete, we are ready for paint, once the weather cooperates.