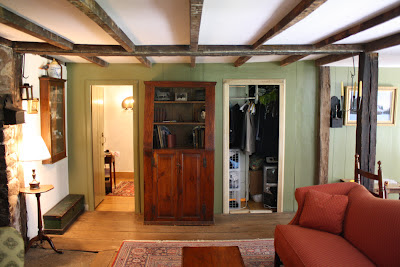 Among the many less than attractive and certainly not original features in our house when we moved in were some built-in shelves in the living room.  I guess they were relatively inoffensive, but, being made of generic and clearly 20th century dimensional lumber they really detracted from the period sensibilities of the living room (original kitchen).  The flaking white paint didn't do the shelves any favors, either.

Seven or eight years ago, as the first salvo in our efforts to restore the room, I ripped out the built-ins.  Typical of our house, their removal revealed both good and bad surprises.  On the bad side were the missing floorboards underneath the cabinets, which necessitated the purchase of some 18th century oak flooring to fill in the gap.  The positive (or at least interesting) surprise was the remnants of a doorway in the wall.  Missing both the trim and the door itself, the opening had been boarded up and covered by the built-ins.  Strangely, the doorway led into what is now Jenny's closet.

Dealing with the doorway to nowhere wasn't on my agenda at that time, so the door remained boarded up, and we covered the opening first with a reproduction step-back cupboard, and then with the 19th century pewter cupboard that replaced the step-back.

Over the years, I laid the groundwork for dealing with the surprise doorway, knowing that I eventually wanted  to restore the wall to the way that it looked in the 18th century.  One excursion to a salvage dealer turned up an antique, two-board, beaded, board-and-batten door that was a good match for the house and that could be cut to fit the existing doorway.  Later, the cracked, single-board header over the door was patched, and the boards filling the door frame were removed.  Still, the doorway remained covered up by the cupboard, and I still didn't know exactly why the doorway was there in the first place.

Last year, however, when doing some research on the house for our National Register of Historic Places nomination, I finally figured out (I think) exactly where the mystery door originally led.  In the will of Enos Kellogg, there is a listing of the items that he owned, arranged by room.  The contents of the North and South rooms, the North and South chambers and the kitchen are all detailed.  Also described are the contents of the "Milk Room".  A milk room was essentially a pantry, typically a cool spot to store foods, particularly perishables like milk and eggs.  It was usually located just off of the kitchen on the cooler side of the house, which exactly describes the location of what is now Jenny's closet. Voila!

This spring I decided that it was finally time to deal with the Milk Room door.  Step one was to have our carpenter recreate door casings to match the only original casings in the room (at least I think that they are original - they're attached with iron rosehead nails).  Step two was to leave the casings sitting in my garage for four months until I got around to actually doing something with them.  On Saturday, I finally installed the casings, and removed from the closet a defunct light fixture, a mess of random wood pieces that were nailed everywhere but serving no structural or practical purpose, and the horrible press-board wall that covered the doorway on the closet side.  Why anyone would ever cover up wide, 18th century, poplar boards with ratty particle board is a mystery to me.  With everything uncovered, I was able to see the marks for the original iron H hinges that hung the original door.  Eventually, I will mount the "new" door with similar period hardware.

Next, I cut the door to size (not easy, as, like all openings in the house, the doorway is more parallelogram than rectangle).  The replacement door also needed a little TLC.  Originally a three-batten door, I wanted to remove one batten to match the two-batten style of other doors in the house.  As one of the battens had been mauled by a dog or other animal, this was not a hard choice to make.  So, off came the munched-on batten at the bottom of the door, which I replaced with the middle batten.  A little filling with Minwax High Performance Wood Filler (a miracle substance that now accounts for probably 2% of the material in my house), and the door was ready for priming and painting.

Oh yeah, I also re-cased the door on the opposite wall with matching casing,